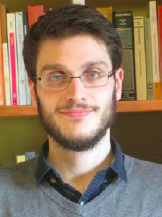 Dr. Alberto Godioli is Assistant Professor in European Culture and Literature at the University of Groningen; prior to that, he was a Newton International Fellow at the University of Edinburgh (2013-2015). He obtained his PhD in 2012 from the Scuola Normale Superiore of Pisa. His research interests include humor and satire in modern and contemporary Europe, modernism, the representation of peripheral spaces in contemporary literature and film, and the intersections between Law and Literature. His most recent book is Laughter from Realism to Modernism: Misfits and Humorists in Pirandello, Svevo, Palazzeschi, and Gadda (London: Routledge, 2015); he has published articles on 20th- and 21st-century literature and culture on international journals such as The Modern Language Review, Pirandello Studies, and Pólemos: Journal of Law, Literature and Culture. email: a.godioli@rug.nl